Our goal is to explore the ethical and social dimensions of technological innovation. Stanford has a special responsibility to address these topics in light of its role as a seedbed of Silicon Valley. By integrating perspectives from computer science, philosophy, and social science, the course will provide learning experiences that robustly and holistically examine the impact of technology on humans and societies.

Pleroma is a microblogging server software that can federate (= exchange messages with) other servers that support the same federation standards (OStatus and ActivityPub). What that means is that you can host a server for yourself or your friends and stay in control of your online identity, but still exchange messages with people on larger servers. Pleroma will federate with all servers that implement either OStatus or ActivityPub, like GNU Social, Friendica, Hubzilla and Mastodon.

Comment by nicbou on I prefer semi-automation | Hacker News

Automation is not just about saving time. It’s also about saving a “recipe” for a task, about avoiding human error, and about staying in the flow.

It’s our industry’s equivalent to mise en place. Deal with the drudgery in advance to focus on your work when it matters.

Although it may sound surprising, the primary focus of a software engineer’s job is not writing code but rather creating value through the use of software that was written. Code is simply a tool to achieve this end goal. Code -> Software -> Value.

How They Must Write: Saving the Five-Paragraph Essay and Other Contingencies by Thomas Basbøll

The five-paragraph essay forces students to be both knowledgeable and articulate about an assigned topic “on the spot” and therefore gives them a straighforward opportunity demonstrate to us whether they have learned what we have tried to teach them. If they know they actually have to a write a good one to a prompt they don’t know in advance ((but of course on a topic that is relevant to the class they are taking) they have a reason, not just to learn the material, but to keep their thinking and prose in good shape.

Why cassettes? by Dominique Cyprès via Hacker News

The way I relate to a recording when I carry it around physically in my pocket—not just my phone, which can provide access to that recording and many others, but a tape dedicated to containing just that recording and no other—just feels different. The tape becomes a little talisman that turns an intangible recording into a very tangible object, something I can see and turn over in my hands and physically give to another person.

GitHub is Sued, and We May Learn Something About Creative Commons Licensing by Roy Kaufman

Plaintiffs allege that OpenAI and GitHub assembled and distributed a commercial product called Copilot to create generative code using publicly accessible code originally made available under various “open source”-style licenses, many of which include an attribution requirement. As GitHub states, “…[t]rained on billions of lines of code, GitHub Copilot turns natural language prompts into coding suggestions across dozens of languages.” The resulting product allegedly omitted any credit to the original creators.

The result is systems that can produce text that is very compelling when we as humans make sense of it. But the systems do not have any understanding of what they are producing, any communicative intent, any model of the world, or any ability to be accountable for the truth of what they are saying. … When people seek information, we might think we have a question and we are looking for the answer, but more often than not, we benefit more from engaging in sense-making: refining our question, looking at possible answers, understanding the sources those answers come from and what perspectives they represent, etc. Consider the difference between the queries: “What is 70 degrees Fahrenheit in Celcius?” and “Given current COVID conditions and my own risk factors, what precautions should I be taking?”

From All-knowing machines are a fantasy by Emily M. Bender and Chriag Shah.

How do we use and influence AI? 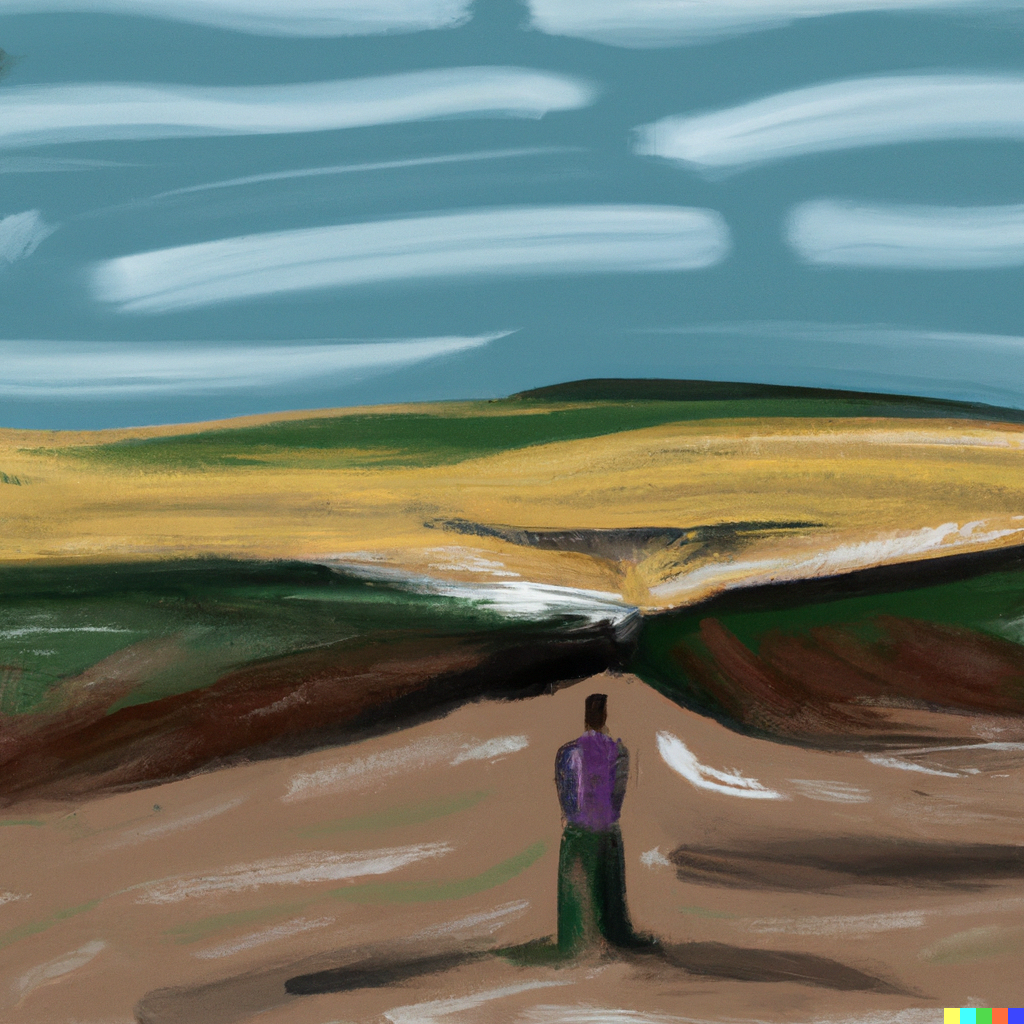 Image Credit: A DALL-E 2 generated image of a person standing in a field, painted in an abstract style

In ChatGPT and the Imagenet Moment Benedict Evans writes:

… a generative ML system could make lots more ‘disco’ music, and it could make punk if you described it specifically enough (again, prompt engineering), but it wouldn’t know it was time for a change and it wouldn’t know that punk would express that need. When can you ask for ‘something raw, fresh and angry that’s a radical change from prog rock?’ And when can a system know people might want that? There is some originality in creating new stuff that looks like the patterns we already have, but the originality that matters is in breaking the pattern. Can you score that?

As AI gets better and better at repeating patterns that exist. As we get better at producing prompts – what Evans calls ‘prompt engineering’. As AI starts getting integrated in tools in ways we don’t even notice. As all that happens, we and how do we identify the places we need human intervention? And not just to retain unique value or to increase the amount of interesting hard work we do, but so that we are not building a future based on our past. Because, you know what? That past is full of exploitation, extraction, and oppression. Many would argue the very AI works is an example. It’s intelligence is built off the work of others in a mass consumption way.

So, what does this mean for civil society? How do we take advantage of the technology, influence the system, and judge the output?

This means two things for you. First, you should be evaluating AI solutions for specific, narrow tasks in your organization and deploying it to fulfill those tasks as rapidly as possible. If, for example, you crank out press releases, AI should be doing all your first drafts now. If you make captions in videos for different language markets, AI should be doing all the translations of those captions. I did a video recently for a friend in French and they said the translation was spot on, helping me be more understandable in their language. For fun, I’ve put Spanish captions into this video as an example. Is the language translation perfect? No. Is it’ usable? Absolutely.

Second, these tools open doors. If you have friends you’ve met online or at in-person events and your language isn’t their native language, you now have a way to communicate with them easily. It won’t be via voice in real-time, but you can absolutely hold a chat conversation in many common languages without needing to speak it and still be understood.